Today we are featuring a guest post from Michele Mattix of Geomattix, LLC.

When ESRI announced that ArcPad 8 would have a brand new interface, I figured it would be a mild face-lift of the same cluttered interface.  Boy was I mistaken!  For those of you who are unfamiliar with older versions of ArcPad, one of the main problems with the interface was the three main toolbars stacked on top of each other which effectively gobbled up the top portion of the screen.  If using ArcPad on a small mobile device where screen real estate is pricey, the stacked toolbars took up too much space to comfortably work with your map.

New Look
With ArcPad 8, you see the improvements immediately upon start-up.  The new Open Map dialog shows the name and now a thumbnail image of your ArcPad map documents.  And those clunky toolbars are gone!  Ditto for the outdated tool icons.  ESRI adopted the ribbon concept introduced by Microsoft Office 2007 – with a clean ribbon of tabbed toolbars.  ArcPad 8 now has three tabs across the top of the screen – each representing the same functionality as the original toolbars – standard, browsing, and editing tools.  If you elect to install the StreetMap extension, you will see a fourth tab for those tools.  You now have the option to dock the ribbon in various places as well as hide it.

For long-time ArcPad users, you will not have to relearn tool locations.  The same tools are still available and grouped on the same toolbars where they always were – they are just more efficiently presented. 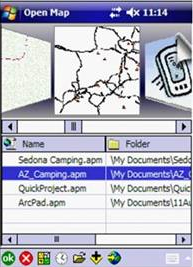 New Functionality
Beyond these cosmetic enhancements to ArcPad, there are some smart inclusions to the new interface.  One is the Quick Action button – a customizable dropdown list where you can place commonly used tools for easy access.   If you or your field workers only use a handful of the available ArcPad tools, you can place all of them in the Quick Action menu and even order them to match your workflow.

Another new feature is the Map Navigator.  It is a group of the four basic navigation tools (zoom in, zoom out, pan, full extent) that appears translucently in the top left of the map.  Using these Map Navigator tools allows for a one-shot use of the tool.   For example, if you’d like to zoom in while in the middle of editing a polyline, you can tap the Map Navigator zoom-in tool, drag a box to zoom-in, and then automatically go back to having the edit polyline tool be active.  If you were to use the regular zoom-in tool on the Browse toolbar in this scenario, activating the zoom-in tool would keep that tool active until you tap to re-activate the edit polyline tool.

GPS Enhancements
For GPS users, there are several improvements in ArcPad 8.  There is a new GPS Status Panel which is a translucent panel at the bottom of the screen with current XY coordinates and other GPS information.  The background color of the status bar changes based on GPS signal quality.  Tapping on it opens the GPS Position window which has been completely updated.  It is now a single window with four tabs that show data, compass, skyplot, and quality information with much-needed modernized graphics for compass navigation and satellite information. 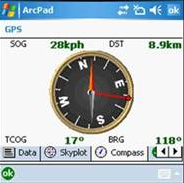 ArcPad 8 now comes with ArcPad Studio.  With previous versions, you had to make a separate purchase of ArcPad Application Builder to customize ArcPad with custom buttons, tools, and behavior.  If you know a scripting language, you can create custom forms, automate tasks, and customize ArcPad behavior.  If you’re not a programmer, the ArcPad Toolbar Manager allows for some basic drag-and-drop customization.

Other enhancements to ArcPad 8 include changes to the Data Manager Extension for checking or copying out data from ArcGIS for use in ArcPad.  You have more options for how you want to work with your GIS data in the field – either as read-only background data or editable data that can be integrated with an existing geodatabase.  For those using ArcGIS Server, the new ArcGIS Server ArcPad extension allows for synchronization of your ArcPad fields edits with an enterprise geodatabase.

Do you need to learn how to use ArcPad?  Check out our GPS Mapping with ArcPad e-training class or contact GeoMattix at [email protected] to find out about other ArcPad training options or to purchase ArcPad software.